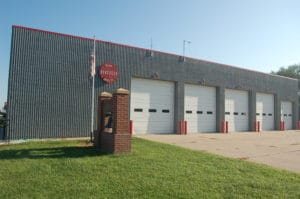 The Henderson Rural Fire District Station is located at the corner of Birch and Main Streets. It was constructed in 1980 housing all fire equipment and ambulance in its five bay masonry structure. There are 27 volunteer fire fighters with Jim Epp being the Fire Chief and 11 EMTs with Cheryl Ratzlaff being the Rescue Captain. In 1995, a Ford 1994 Road Rescue Supermedic-mounted on a 1994 Ford E-350 with a 158″ wheel-base was purchased. This unit is equipped with a new defibulator purchased in 2005. The fire truck is a 2002 Ford. Other equipment purchased in 2006 as a joint effort between the Rural Fire Board and the City Council was a new jaws of life unit.

The team of fire fighters and EMTs practice by having mock accident drills every so often. Some of the incidences have included a bus load of students that had gone off the road and down an enbankment landing on its side. At other times it will be a mock accident involving vehicles on a country road. Afterwards, the volunteers critiqued the way they handled the situation and what should have been done differently for future improvement.

The Fire and Rescue Board meets every first Monday of the month at the Fire Hall commencing at 7:30 p.m. The Ambulance Board meets once a year.